This is the Amalfi Coast Tour that our guests love the most!

This tour of the Amalfi Coast starts with the views from Castellammare di Stabia, a city that is known for its shipyards, and is also visited for its thermal spas. The name of the city derives from the name of a medieval castle (castrum ad mare), to which the name of the ancient city of Stabiae, destroyed when Vesuvius erupted in 79 AD together with Pompeii and Herculaneum, was later added.

Vico Equense preserves a wealth of evidence of its past. Sites include the Sorrentine peninsula’s only Gothic church, the church of the Annunziata, as well as Castello Giusso, a castle founded by the Angevins and restructured between the 17th and 19th centuries. The State Road from Vico Equense becomes windy, following the twisting slopes of the Lattari mountains.

From Meta visitors can see Sorrento off in the distance, as well as the silhouette of Capri, which lies beyond Punta del Capo. The road then goes up to cross the Lattari Mountains and get on the Amalfi Coast side of the peninsula.

As the road starts descending on the Amalfi Coast the first amazing view welcomes you: three kilometres from the coast are Li Galli, a small archipelago made up of three islands: Gallo Lungo, La Rotonda and Castelluccio. The islands are private property and visits are not permitted. But they may still be admired from the sea, perhaps with a mini-cruise around what was formerly the residence of the Russian dancers Léonide Massine and later Rudolf Nureyev. 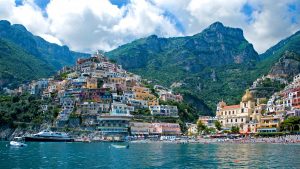 Positano, as seen from the sea.

The first stop is Positano.

We will leave the introduction to one of the greatest American writers of the 20th century, John Steinbeck, winner of the Nobel Prize for literature, and one of the many people to fall in love with the town: “Positano bites deep. It is a dream place that isn’t quite real when you are there and becomes beckoningly real after you have gone.”

According to legend, Poseidon, god of the sea, ‘modelled’ Positano for love of the persuasive nymph Pasithee. Fruit of a legendary passion, today the most famous town of the Amalfi Coast is an international tourist destination.

Surrounded by the Lattari mountain chain, the most divine town of the Divine Coast winks at Punta Licosa and enchanting Capri. Everything is enveloped by a magic that conquers the heart and enchants the mind.

The earliest records date back to the time of the Greeks and Phoenicians, who discovered the area, then inhabited by Oscans or Piceni, on their westward travels. A fine patrician villa, built close to the main beach, now buried under gardens, and the church of the Assunta bear witness to the presence of the Romans. With the fall of the Roman Empire, the town became part of the Republic of Amalfi, and consequently increased maritime trade with other Mediterranean countries. This economic growth was interrupted by Angevin and Aragonese rule. In order to defend themselves from continued attacks by pirates the people of Positano erected three watchtowers which are still visible today: Fornillo, Trasita and della Sponda. Economic prosperity returned only in the 18th century. The maze of small streets, dominated by the majolica cupola of the church of S.Maria Assunta, is a true artisan journey with the unique pezze, or clothes, providing a multifaceted backdrop. La Moda Positano (Positano fashion), so fanciful with its lace and voiles, is the crowning achievement of a town whose economy depends greatly on handmade products. Embroidered, handpainted clothes and accessories and made-to-measure leather sandals are the souvenirs par excellence which the tourist inevitably takes away from this pearl of the Amalfi Coast.

After 1 hour of free time in Positano, the Amalfi Coast Tour will continue, and you’ll meet the driver again and departure headed to Amalfi.
Famous throughout the world for its evocative landscape and for its almost unnatural calm, which pervades the soul of the most disenchanted traveller,Praiano is joined with Vettica Maggiore, a splendid urban agglomeration of terraces of lemon groves and golden sunsets. Two villages in one overlooking the sea: from one side the eye follows the winding coast to the tower of Conca, from the other there are open views as far as the hills of Fontanelle.

The name of Furore comes from Terra Furoris, an expression borne of the majestic spectacle of the waves crashing against the rocks of the famous fjord at the foot of a valley reached by a long flight of stone steps, or by crossing the SS 163 road. Each year a spectacular diving competition is held here with athletes from all over the world. A magical, enchanted place, Furore has often been used as a location in many famous films, particularly those of the Italian Neorealist movement, whose most famous exponent was Rossellini.

A handful of bends along the world’s most stunning coastal road and, from Furore, we approach Conca dei Marini, another fascinating town . Its panoramic views are stunningly beautiful, starting with the collection of houses which rise from the seafront to the main coastal road which leads to Amalfi. Close by is the Grotta dello Smeraldo (Emerald Grotto), an extraordinary natural formation, measuring 60 by 30 metres, rich in stalactites and stalagmites which in some cases have fused together to create limestone columns over ten metres high, and accessed by lifts at ground level or by sea, departing from Amalfi. But the jewel in the crown of Conca dei Marini is the complex of the former convent of Santa Rosa, one of the largest and most representative buildings on the Amalfi Coast and which includes the church with cupola and small bell tower built on a steep rocky projection from where it surveys the surrounding area. 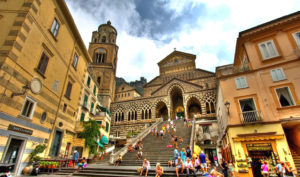 The ancient Maritime Republic of Amalfi appears in all its splendour. According to legend, the birth of the city is attributed to the pagan demigod Hercules, who buried his beloved Amalfi here on the orders of the gods. Thanks to its maritime skills and the development of the compass by Flavio Gioia, Amalfi became a flourishing economic centre throughout the entire Mediterranean and established commercial relations with its neighbours, including the Saracens. Its sumptuous past has left the people of Amalfi with a picturesque network of alleyways, open spaces and steps which lead to the wide and airy main square. Along with numerous examples of art, culture and seafaring civilisation. The majestic cathedral, dedicated to the cult of Sant’Andrea, is in the centre of piazza Duomo, the main square of Amalfi. Erected in the 9th century and rebuilt in Siculo-Arabic style in the 13th century, with 18th-century additions, it still retains the main ancient elements: the bell tower, the bronze doors made in Constantinople (around 1066) and decorated with the figures of Christ, the Madonna and saints Andrew and Peter, the 13th-century chapel of the Crocefisso, which houses the Museo Diocesano (Diocesan museum) and the ambos and candelabra. The polychrome façade was reconstructed in second half of the 19th century. Those who wish to look beyond Amalfi’s most famous iconography are advised to visit the Antichi Arsenali (Ancient Arsenals), where robust galleys were once built to transport cargoes of spices and precious materials to the East. The Arsenali are the primary point of contact with the former Republic whose traces can also be found in Palazzo San Benedetto, now the town hall. Here it is possible to see the Tabulae Amalphitanae, the first naval codes, set out at the time of the Republic. As well as copies of maritime laws, it is also possible to admire three panels by Domenico Morelli, one of the most famous artists of the 19th century, the source of the mosaics which cover the façade of the cathedral. In addition to being known as a former maritime Republic, Amalfi is also famous for being the home of the skilled production of handmade paper. Production still takes place in the Valle dei Mulini (Valley of the Mills) where, in the late 18th century, thanks to the existence of over fifteen paper mills, a sort of industrial settlement was created, alongside the already existing one of peasants and fishermen. Handmade paper is still produced in Amalfi, albeit on a much reduced scale, and mostly for personal use, for artistic creations or luxury limited edition texts. For an in-depth study of the production of ‘Bambagina’ paper, we recommend a visit to the Museo della Carta (Paper museum), on the road which leads to the Valle dei Mulini. Here you will find a complete overview of the historical development of this ancient skill which still survives, just a little further on, in the last remaining active settlement belonging to the Amatruda family. A few steps from the temple of paper is the Museo della Civiltà Contadina (Museum of rural life), which contains a collection of rudimentary machines and utensils used in agriculture in the coastal area over the last four centuries.

We leave Amalfi, after 1 our of free time, headed to Ravello…
Just over a kilometre away is Atrani. Enclosed between the steep walls of rock which flank the green funnel of the Dragone valley, Atrani is the coastal town which has best conserved its ancient topography. With its typically medieval urban structure, composed of alleyways, arches, courtyards and squares and with its typical ‘little stairways’, it looks like a miniature nativity scene. 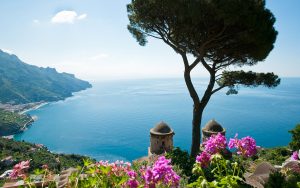 After Atrani, we leave the coastal road, and start the ascent to one of the gems of the Amalfi Coast Tour: Ravello, a real centre of historic, artistic, architectural and monumental treasures, but above all home to the International Festival held for over sixty years by the Salerno Tourist Board. Every corner of this city makes a lasting impression on the heart and soul of the visitor. The cathedral is dedicated to San Pantaleone and dates back to the 9th century. But Ravello is justly famous throughout the world for its spectacular historic residences. A short distance beyond the cathedral, a rectangular tower marks the entrance to Villa Rufolo, a collection of buildings dating back to the second half of the 13th century. The dizzying panorama which so enchanted Wagner in May 1880 has since formed the backdrop to the Ravello Festival. The other panoramic residence in Ravello is Villa Cimbrone. With the help of skilled local craftsmen, in the space of 15 years he transformed a simple piece of land into a villa which magically combines the most fascinating antiques with the most exciting modernity. The view from the terraces, which stretches from Punta Campanella to Punta Licosa, taking in Capri, the Sorrentine peninsula and the Gulf of Salerno, is something that you’ll never forget.

After one hour of free time in Ravello, the third and last stop, it’s time to sadly say goodbye to the Amalfi Coast. We continue the ascent to Chiunzi, where we cross again the Lattari Mountains. The last amazing view of this tour suddenly appears: the bay of Naples, Ischia, Procida, Mount Vesuvius and the Agro Nocerino Sarnese.

An Amazing day trip to Amalfi Coast from Napoli.

This Amalfi Coast Tour is among the most appreciated ones by our guests, it lasts about 8 hours and is the most convenient choice for those who want to see the Amalfi Coast in one day, having the opportunity to take amazing pictures and have free time in Positano, Amalfi and Ravello.

Back to our featured tours.

Along the Amalfi Drive 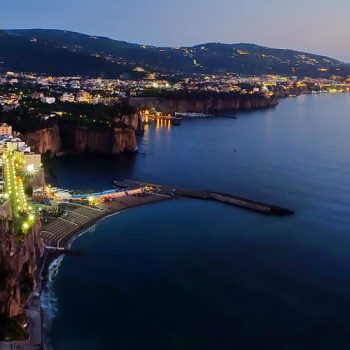 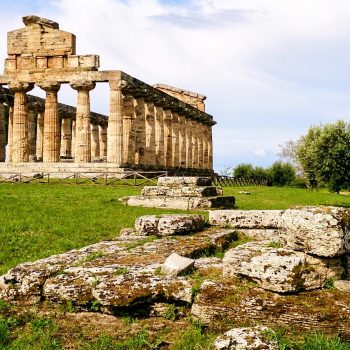